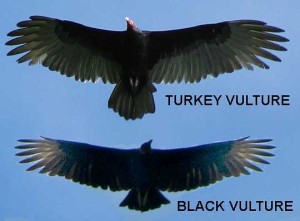 The Borough has purchased several pyrotechnic guns.  These pistols shoot “screamers” to encourage the vultures to move.  The use of firearms or pyrotechnics to harass the birds is illegal without a special permit from the Borough.  The Borough could acquire a depredation permit to kill a select number of birds to use their bodies as effigies as another harassment technique.  Unfortunately, the Borough has not received enough damage data from residents to justify the permit. Please contact the Borough to provide damage information, caused by the vultures, to help justify the depredation permit.

Those who use the pyro pistols must abide by the following rules for the safety of all residents:

To learn more about the Turkey Vultures and Black Vultures, download these flyer’s from USDA: Vulture Fact Sheet & NWRC vulture brochure. WARNING: Vultures are protected birds and must be dealt with in accordance with Federal and State law.  Do not take these matters into your own hands!